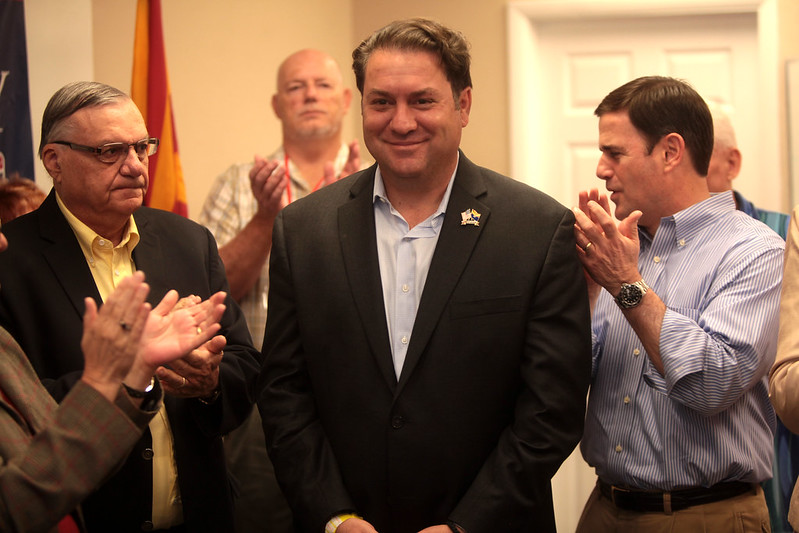 There’s a strange Twilight Zone situation taking place in Arizona, where former President Donald Trump has decided to endorse a trainwreck candidate for U.S. Senate to take on Sen. Mark Kelly, instead of the candidate with one of most solid conservative records the state has ever known. Attorney Blake Masters, who is funded by four out-of-state billionaires, has zero record in politics other than previous evidence he was a radical pro-choice Libertarian, and even though many candidates are getting involved in election integrity lawsuits, he hasn’t bothered to join even one. Instead, he sits around all day pitching himself to get on TV, where he calls Arizona Attorney General Mark Brnovich — who has been endorsed by Mark Levin and Sean Hannity — a “do-nothing RINO.”

This couldn’t be further from the truth. Brnovich has sued the Biden administration probably more than any other elected official, constantly leading coalitions of states in lawsuits over COVID-19, border security, environmental restrictions and more. Brnovich has a winning Supreme Court election integrity case named after him, Brnovich v. DNC, for inserting himself into a lawsuit where he wasn’t even involved, defending two Arizona laws. When the DNC sued Arizona over its bans on ballot harvesting and voting outside your precinct, radical Democrat Secretary of State Katie Hobbs refused to defend the lawsuit so Brnovich stepped in instead.

Politicians and websites thirsty for clicks talk big about prosecuting renegade election officials, but they forget that in order to maneuver the left-wing dominated legal system, they have to be ridiculously careful. As a result, many of the lawyers involved with exposing fraud in the 2020 presidential election are being unfairly disbarred or prosecuted for flimsy reasons, things that would be ignored otherwise if they didn't involve Trump.

This has left progressives gloating ad nauseum that no court has found any evidence of voter fraud. But Brnovich has quietly been working behind the scenes, barely dodging 12 bar complaints from Hobbs over his election integrity efforts. He’s a rare breed of conservative lawyer who’s figured out how to go after election fraud without getting disbarred.

Much of the accusations from Masters’ millions come down to a single accusation, that Brnovich said there was no election fraud immediately after the 2020 election. But that was taken out of context, he merely said he hadn’t personally seen any yet. All of his efforts since then show he’s worked doggedly — but wisely — to combat the fraud.

Brnovich went to court and successfully stopped Democratic Maricopa County Recorder Adrian Fontes from illegally mailing thousands of ballots to voters in 2020 who didn’t request them. He intervened and prevented the illegal “curing” of ballots with no signatures. He issued a cease-and-desist letter to a ballot harvesting operation.

After the election, Brnovich told the Maricopa County Supervisors to increase the number of ballots counted by hand from 2% to 5%, but they refused. Hobbs demanded that Brnovich shut down the audit, but he didn’t. He forced the Maricopa County Supervisors to turn over materials they were withholding from the audit, threatening to withhold their funding, and filed a brief defending the audit.

He went after DHS Chief Alejandro Mayorkas for trying to interfere with Arizona’s election integrity efforts. He’s prosecuted countless people for voter fraud, including a Democratic operative involved in ballot harvesting who was likely the one featured in the 2,000 Mules documentary.

He is still investigating the results of the audit, releasing a preliminary interim report in April which found that 100,000 to 200,000 ballots lacked a chain of custody. He slammed Maricopa County officials’ response to his report while appearing on Steve Bannon’s War Room, for dismissing accusations of using AI to verify voter signatures on ballot envelopes. He issued a report recommending election changes. He’s done too much to list here, including going after petition circulators.

And there’s more in the works. He’s leading a coalition of states to defend North Carolina’s voter ID law and backing a Georgia law in court. He sued Hobbs over her failure to provide a lawful state election procedures manual. Hobbs refuses to include provisions prohibiting unstaffed drop boxes, requiring signature verification for non-mailed early ballots and preserving the requirement that voters vote in their precinct. He’s asked for a criminal investigation into Hobbs.

In contrast, Masters has done so many offensive things that he will be destroyed in the general election by Kelly, who’s on track to raise another $100 million like he did last election. Since my original trainwreck article about Masters was published, it’s been revealed that the candidate some call “Richie Rich, a gated community Libertarian who’s gonna say anything to get elected,” made a rap video wearing Native American war paint. Between that and his other “macaca” moment declaring that blacks are responsible for gun deaths, and his disturbing ties to the authoritarian neoreactionary movement, he has no chance of winning over the moderate swing voters necessary to beat Kelly. He’s so desperate that many of his claims about Brnovich’s inaction on election integrity are flat-out lies.

Longtime D.C.-based conservative writer Quin Hillyer wrote an article earlier this month titled “Trump Endorses Strange Arizona Man Over MAGA Star,” expressing his bewilderment over the Masters endorsement. Trump has made several other endorsements that have frustrated the conservative base, including J.D. Vance in Ohio and Dr. Mehmet Oz in Pennsylvania. At Trump’s rally in Arizona Friday night, the audience booed when he announced his endorsement of Eli Crane in the state’s 2nd congressional district.

Brnovich is the only candidate polls show who comes within two points of Kelly. If Masters wins, political experts say it will be a repeat of the Martha McSally disaster. After McSally, a terrible candidate who turned off the base, lost the U.S. Senate race to Democrat Kyrsten Sinema, Gov. Doug Ducey appointed her to the other seat to replace John McCain. As expected, when it came time for the election in 2020, she lost to Kelly.