The Left is Becoming Increasingly Similar to the Taliban 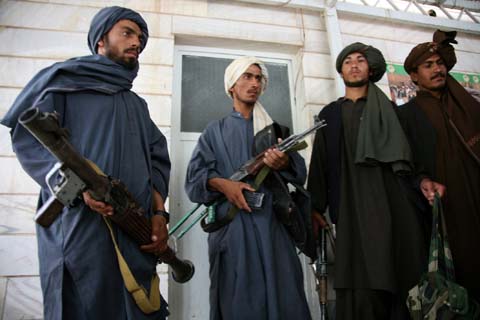 
The left likes to use its support for murdering unborn babies as evidence the right discriminates against women, but stepping back and looking at the big picture, it’s clear the left’s policies are more in step with the misogyny of the Taliban. In fact, the left’s increasingly fascist tendencies are starting to move toward many policies of the Taliban. The comparison is rarely made, however, because the similarities are subtle and are increasing slowly, akin to heating up a frog slowly in boiling water so it doesn’t realize what’s happening.

The Taliban demands absolute adherence to its rigid beliefs, just like the left does with wokism. Re-education or else. Wokism is being coded into law, trampling on multiple rights including free speech, freedom of religion, freedom of association, the right to keep and bear arms, states’ rights and equal protection. Those who dissent are targeted and often held up as examples as a warning to others what will happen to them if they engage in the same type of behavior. Senior Taliban leaders recently said the harsh application of sharia law during their first era of rule in the 1990s was necessary because of the "depravity" and "chaos" that remained from the Soviet occupation.

We see this take place in the U.S. frequently with civil protest. The left went after the J6 protesters heavy handedly, deliberately interpreting their actions in the worst possible light. In contrast, the “civil disobedience” of Antifa and BLM, burning down buildings and looting, was largely ignored because it was activism on the left. The J6 protesters were treated like violent felons, even though it was clear most of them were naive, not realizing the police officers waving them into the U.S. Capitol didn’t really mean to. Many were jailed for months without trials for non-violent offenses.

The Taliban executes gays. So it was no surprise when the left came after gay conservative #WalkAway founder Brandon Straka extra harshly over J6, threatening to put him in prison for years with multiple felonies if he did not plead guilty to the misdemeanor offense of disorderly conduct. First time criminal offenders charged with disorderly conduct rarely get prosecuted, especially in this era with big blue cities like Washington D.C. no longer putting significant resources into prosecuting misdemeanors. Straka didn’t even enter the Capitol or engage in violence, prosecutors merely cited his statements. No doubt they were angry he gave a speech at the rally. He still must complete three years of probation and pay a $5,500 fine. He avoided posting on social media for an entire year during the prosecution, due to the threats of escalating the prosecution.

The left cracks down on the pro-life movement, which is predominantly led by women. They are prosecuting them for not complying precisely with artificially carved out laws and legal interpretations regarding protests outside abortion clinics. People were shocked around the world to hear about a woman in the UK who was arrested last month for merely praying silently near an abortion clinic.

The Taliban treats women as inferior, similar to how the left treats women as if they are constantly at risk for sexual assault, unable to defend themselves using a firearm or lacking the ability to compete academically on merit alone. They have instituted affirmative action and quotas everywhere as if women are incompetent in education, employment and entertainment. The Taliban has kept some women employed in government as tokenism, to create the illusion of equality. Some of them are forced to sign in to their jobs but then sent home.

Similarly, the left puts women in do-gooder, feel-good positions of relative low worth. Instead of challenging and rewarding types of jobs, the left herds women toward “Karen” types of  employment. First they encourage them to major in Gender Studies and other degrees that are mostly worthless. Then they usher them into positions like affirmative action coordinator and gender identity specialist. They will be disliked by many holding those positions, not likely to gain much self-worth in them, constantly reminded of their alleged inferiority.

When the Taliban allows women to attend school, they are segregated by sex. Similarly, the left is increasingly promoting all-female schools and classes. Men report horrible experiences attempting to major in Women’s Studies or attend one of those types of classes. Just like the Taliban, the left overly emphasizes the differences between the two genders, artificially increasing the divide and hostility between the sexes.

The Taliban discriminates against religious and ethnic minorities. The left has been moving in that direction for years. They are trying to stamp out the Christian religion with legislation, gloating as Christianity dwindles. Breathless headlines blare every time a new study comes out showing fewer identify as Christians or attend church. A September 2022 survey dominated the news for days, which asserted that Christianity could become a minority religion as soon as 2045.

The left reserves some of its cruelest vengeance for conservative blacks and other ethnic minorities. It’s become a common theme. Many are blatantly arrogant about the status quo, like President Joe Biden, who told Charlamagne tha God, "If you have a problem figuring out whether you're for me or Trump, then you ain't black.” Politically motivated prosecutors under the Obama DOJ went after Dinesh D’Souza for an election violation that would have been handled civilly for anyone else, putting him in prison.

The left is using the government to crack down on opposition and dissent just like the Taliban, it’s just not as overt or drastic; there are no executions or hands chopped off. Instead, the left comes after people with bogus prosecutions and creates Orwellian new rules and laws to restrict their behavior. The rights of conservatives are trampled on with these laws, while the left is free to do what it wishes, because it’s renamed its authoritarianism to “doing good.”