The GOP and Sinema: A Love Story 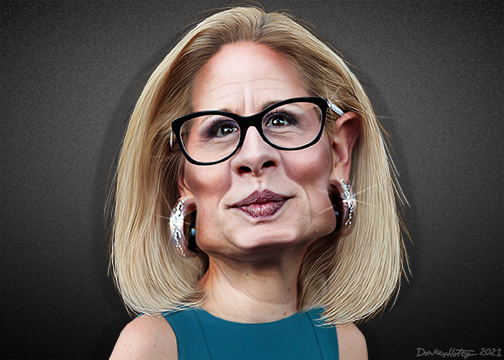 Kyrsten Sinema/Gage Skidmore by N/A is licensed under N/A N/A
The Senate in the 118th Congress will surely be a divided one.  Ever since the two Georgia Senate runoffs of 2021, the upper house of Congress has been composed of a 50-50 body, 50 Republicans and 50 Democrats, with Vice President Kamala Harris being the tie breaker.  Therefore, the Democrats have managed to take Senate control, leaving the Republicans the Senate minority party.

Recent election results have the new Senate set to be 50 Democrats and 49 Republicans, with a Georgia runoff once again deciding the final tally.  However, despite who may prevail in the runoff, the Democrats will hold onto Senate control.  We are now only waiting to see if the Democrats will have a 51 seat majority, or if they will once again need VP Harris to be the tie breaker in a 50-50 Senate.  At this point, it is anyone's guess who might win the Georgia runoff, but either way it goes, it will have a monumental impact.

Just two centrist Democrat Senators have managed to essentially control the Senate agenda for the last two years, Joe Manchin of West Virginia and Kyrstin Sinema of Arizona.  Should they decide to run again, both will be up for reelection two years from now.  As a matter of fact, in 2024, Democrats will be defending 23 seats, and Republicans just 10.  Another area of concern for Democrats, of those 23 seats they will be defending, 3 are in states that Donald Trump won by healthy margins in both 2016 and 2020, meaning all three are highly vulnerable.  Other matches also look to favor Republican challengers over current Democrat incumbents, will likely have a Democrat retirement, or at least appear to be potential tight races.  On the other hand, Republicans will only be defending seats in states won comfortably by Trump in 2016 and 2020.  If Republicans can take advantage of this advantage, they will likely control the Senate for at least a decade.

Joe Biden carried Arizona in 2020, and after the recent election, Republicans will not hold any statewide office in the state.  However, of all Senate contests in 2024, one stands out above all.  Democrat Kyrstin Sinema, the Senior Senator from the Grand Canyon state may be the most vulnerable Senator of all.  She won her Senate seat in 2018 with just 50% of the vote in one of the closest elections of the year.  In her 4 years in the Senate, she has managed to be a constant thorn in the side of Democrat priorities, and has made her share of enemies in her own party.  Her refusal to vote to end the filibuster, which would have allowed Democrats to pass voting rights legislation, as well as trillion dollar spending bills, like the Inflation Reduction Act, has made her persona non grata with many progressives in her party, and sunk her approval ratings with Democrat voters in Arizona.  A January poll from Civiqs via the Daily Kos had her approval ratings among Democrats to be at an abysmal 8%.  It is now almost a sure bet that progressive Democrat Arizona Rep. Rueben Gallego will soon begin a primary challenge against her.

Rep. Gallego recently tweeted regarding Sinema's absence during the 2022 election, "I mean you could be out there helping our candidates, but my sense is that you would actually prefer the Dems lose control of the Senate and House."  Gallego was also quoted as saying,
"She could have been a very good surrogate to help out a lot of our candidates, but she did nothing. Because she only cares about herself."

And he isn't the only Democrat with less than an endorsement of Sinema's reelection:

Pro-choice groups EMILY’s List and NARAL recently announced they would no longer support her.

When asked if he would be open to supporting a primary challenger for Sinema, Bernie Sanders simple answer was, “Yeah, I would.”

Democrat political consultant Tom Watson tweeted in January that Sinema "chose her side, and that side is white supremacy. That's who she is. That's what defines her now."

In censoring Sinema for her filibuster stance, Arizona Democratic Party
Chair Raquel Terán said in a statement, "While we take no pleasure in this announcement, the ADP Executive Board has decided to formally censure Senator Sinema as a result of her failure to do whatever it takes to ensure the health of our democracy."

Recently, during a speech at the McConnell Center, Sinema said referring to Republican Minority Leader Mitch McConnell:
“In today’s partisan Washington, it may shock some that a Democratic senator would consider the Republican leader of the Senate her friend, but back home in Arizona we don’t view life through a partisan lens.  Arizonans understand that while we may not agree on every issue, we do share the same values."

McConnell has called her “the most effective first-term senator I’ve seen in my time in the Senate", and has said, "As you can tell, I have a very high opinion of the senator from Arizona.  But my biggest compliment to her is: She protects the institution of the Senate." In another quote, he gushed, "She is, today, what we have too few of in the Democratic Party: A genuine moderate and a dealmaker."

One of the most conservative Republican House members (also Leader of the conservative Freedom Caucas) Andy Biggs was seen on video shortly after Sinema reiterated her pledge to keep the filibuster alive saying, "Thank goodness for Kyrsten Sinema."

Republican John Cornyn, Senior Senator from Texas has said, “My experience with Sen. Sinema is she’s very smart and she’s willing to work with people on both sides of the aisle to solve problems. We don’t have enough people like that around here,”

Former Republican Presidential nominee and current Republican Senator from Utah Mitt Romney regularly refers to Sinema as a "good friend".  Both were raised in the Mormon Church and are fellow BYU graduates.  They also made a big splash on social media in October by appearing as Halloween costume partners.  Some of the ways that Romney has been quoted as describing Sinema include, "a brilliant individual", "one of the smartest people in the building", and a lot smarter than me."

Republican Senate Minority Whip John Thune of South Dakota has been known to be close to Sinema, saying, “We’ve all made various attempts and runs at getting her to join our caucus. I think she’s comfortable where she is."

Maybe it's time for Senator Thune and his colleagues to give another push to bring Sinema over to the big tent Republican Party.  If Hershel Walker wins the upcoming Senate runoff in Georgia, the Senate would remain at an even 50-50.  If Sinema became a Republican (or even an Independent who would caucus with Republicans), party control would go to the GOP in a 51-49 Senate, and Mitch McConnell would become the Senate Majority Leader.

In switching parties, Sinema would be able to ask for the moon.  Would Chair of the Appropriations Committee be too much to ask???  She would become a Republican hero, and guarantee her reelection two years from now.  She would establish her maverick "McCainian" credentials, and would be a fixture in the Senate as long as she wants to be.  Contrast that with running as a Democrat against a progressive primary challenger and an 8% Arizona Democrat approval rating.  She has three choices: decline to run for reelection, run as a Democrat and lose, or win as a Republican in a Senate likely to be in Republican control for at least the next decade.  In an interview with Politico, she was recently asked if she has considered switching parties.  Her response was,
"Why would I do that?"  If she was really looking for an answer, she simply needs to read this article.

About the author:
Rod White is the author of the novel The Legacy of the True Believers.  He resides in Pittsburg, CA, working as a Talent Acquisition Specialist for a non-profit organization, as well as a freelance writer.  He has named John Grisham, Ben Shapiro, and Ann Coulter as some of the writers who have influenced his work.