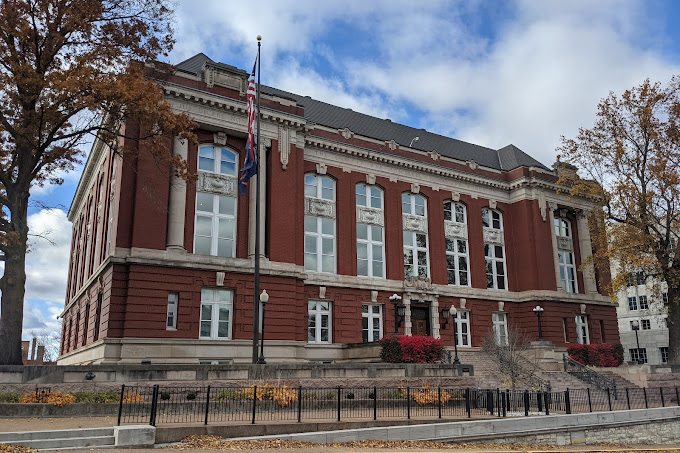 Missouri Supreme Court by Will Osborne is licensed under Google Maps N/A
UPDATE:  Conversations with those involved indicate that the certification issue is dead, not appealable, and that Amendment 3 is in effect.  However, the Constitutional issues are valid.  Legislators have standing to file requests to have Amendment 3 reviewed by the Missouri Supreme Court on the Constitutional issues identified in this Request.  We will redraft the Request and publish a new request at a later date.  We believe the Court will be motivated to rule in our favor.

This Notice is a request for nostra sponte review and reversal of decisions by the Cole County Circuit Court and the Western District Court which resulted in Secretary of State Jay Ashcroft being forced to certify Amendment 3 Marijuana Legalization on the November 8, 2022 election absent the court-ordered supervised recount of petition ballot signatures in District 6 necessary to legally certify Amendment 3 for the November 8th election.

My analysis indicates that improper jurisprudence by both the Cole County Circuit Court and the Western District Court is the sole reason why Amendment 3 was improperly certified for the election.

The Missouri Supreme Court en Banc has superintending authority under Missouri Constitution Article V, Section 4 to review actions of lower courts nostra sponte without an active case filing, and may have authority to correct errors made by courts beyond disciplinary measures up to and including deciding that Amendment 3 was not legally placed on the ballot, the vote invalid, with issuance a permanent Stay order barring implementation of Amendment 3.

We do not fault the Missouri Supreme Court for rejecting the appeal in Sweeney v. Ashcroft.  The effect of the Western District Court of Appeals decision forcing Secretary of State Jay Ashcroft to certify Amendment 3 was not conspicuous.

If the Court cannot issue Orders within an Article V, Section 4 proceeding, the Court has authority to nostra sponte revisit its decision rejecting the appeal in Sweeney v. Ashcroft. The evidence I bring forth suggest review and reconsideration is of paramount importance to the State of Missouri.  Whether or not this requires hearing is at the judgement of the court.  I suggest the court might be able review the case record and issue orders as no additional testimony is needed as relitigation of the case is not requested here.  The case record speaks for itself.  If necessary, a hearing limited to adjudicating the issues presented in our request would be both efficient and productive.

John Quincy Adams once said: “Facts are stubborn things; and whatever may be our wishes, our inclinations, or the dictates of our passion, they cannot alter the state of facts and evidence.”  I suggest that the rule of law exists only when the People can implicitly trust Courts to stand firm when facts require upholding the rule of law.

We are aware that Amendment 3 will impose tremendous costs, restrictions, liabilities, and harms on the Executive, Legislative and Judicial branches; and the citizens of the State of Missouri.  I will therefore be requesting that public officials file similar Requests with the Court.  The Missouri Supreme Court is, in fact, the only institution capable of defending the State of Missouri from what may be the biggest Constitutional crisis in state history.

Notes:
Access to hyperlinked and printable 29-page versions of this Request:

I am including Section 1 of the full document containing the Request for Nostra Sponte Emergency Order barring implementation of Amendment 3 Pending Review so everyone undertands the constitutional crisis faced by the State of Missouri and the need for the Court to act quickly:
Where:
Therefore:
We request an immediate Emergency Stay Order barring implementation of Amendment 3 pending timely full review of Sweeney v. Ashcroft, Amendment 3, and decision of the Missouri Supreme Court en Banc.
Missouri Supreme Court by Will Osborne is licensed under Google Maps N/A
Tweets by Rachel Alexander