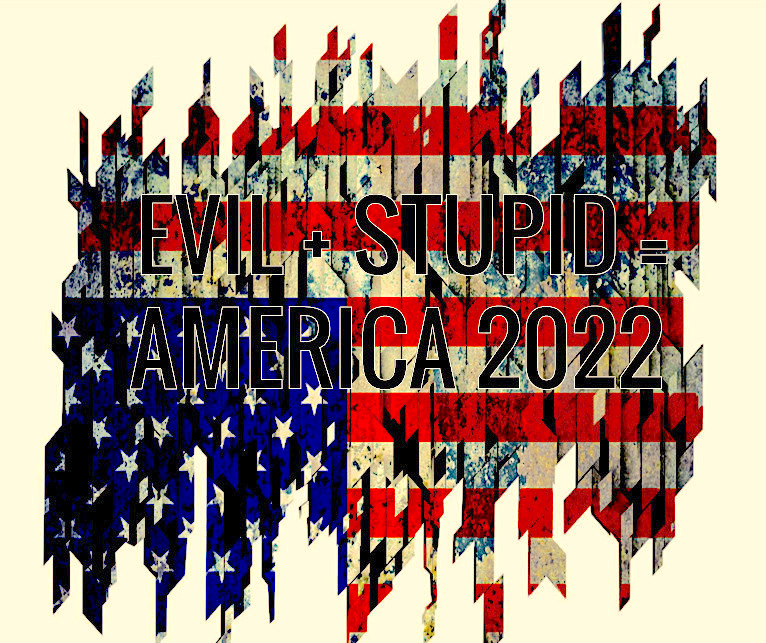 evil plus stupid by N/A is licensed under N/A N/A
I never thought I would live to see the United States of America become so flagrantly evil and so astonishingly stupid. But here we are. This is the dark distressful reality that at least one 62-year-old man sees in America 2022.

US establishment leaders in government, corporations, media, academia, science, medicine, and other institutions are conspiring and collaborating on the purposeful promotion of this evil in so many ways that it is difficult to keep track. And both major political parties are equally culpable for what is happening.

There are numerous examples of this American establishment evil that I could cite. Here are ten:

1) They are proudly perverting the minds and mutilating the bodies of children (as well as adults) through the gay and transgender ideologies. (Drag shows and sex-change propaganda even in kindergarten!)

2) They are dismantling the fundamental foundations of the economy and creating unnecessary energy and food crises by sabotaging the fossil fuel industry, subverting the agriculture industry (eg, limiting fertilizer), and spreading the false religion of climate change.

3) They are destroying the lives of anyone who dissents from their various established orthodoxies, such as through job firings for refusing to get the COVID vaccines (happened to me) and prosecutions for expressing anti-establishment views (eg, Trump associates, January 6 protestors).

4) They are demolishing the integrity of the medical and scientific professions, such as through the COVID/vaccine/mask ideology, the constant drug pushing (and drug company profiteering), the climate change dogma, and the blatant fraud, corruption, and group think (eg, recent Alzheimer fraud revelations).

5) They are crushing free speech and independent thinking, such as by censoring anti-establishment social media posts, suppressing/marginalizing independent thinkers (eg, scientists, writers, political commentators) who don’t go along with their lies, and exerting financial pressures on companies to comply with their “woke” agendas (eg, ESG). (As a freelance educational writer, I have been dropped by four of my clients over the past couple years because of my refusal to bow to their woke BS agendas of COVID, climate change, and “systemic racism.” That is how they silence dissent and achieve “consensus.”)

6) They are provoking social chaos throughout the country, such as by stoking the flames of racial division and hatred, eliminating immigration controls, unleashing (not prosecuting) violent criminals, promoting harmful drug use (both prescription and recreational), subverting all traditional values (including the concept of the nuclear family), and generating confusion about all kinds of basic facts (from biology to history to mathematics).

7) They are provoking geopolitical chaos, instability, flashpoints, and war around the world, such as the Ukraine conflict, the Taiwan tensions, the Sri Lanka crisis, the renewed trouble in Serbia, the never-ending Middle East messes, and a coup over here and another coup over there… They are acting in such recklessly irresponsible ways in some cases (Ukraine, Taiwan) that it seems as if they actually lust for nuclear war! As both the Republican and Democrat parties push American imperialism, conflict, and killing in country and country, their military-industrial complex donors are reaping the financial profits. And their media mouthpieces are dutifully reporting the desired warmongering propaganda.

8) They are rapidly turning over all American sovereignty to secretive scheming power-mad authoritarian globalist institutions, like the World Economic Forum and World Health Organization.

9) They are continuing to undermine and selectively apply the US Constitution in so many ways that the United States is now essentially a post-Constitution country.

10) Their sick twisted ideologies, propaganda, and lies have infiltrated and perverted every single large institution in the United States, as well as the rest of the Western world… government, military, corporate, media, pop culture, academic, education, literary, art, scientific, medical, every f---ing thing… There is really nothing left. Independent thought and individual freedom have been beaten to such a bloody pulp that they are essentially dead now.

This is all very evil shit!

And as all this evil shit is happening, the vast majority of Americans remain compliant to it, accepting of it, or completely oblivious to it. Brainwashed, ignorant, or both. Stupid, in other words. Just look at all the dumbasses continuing to wear their face diapers, getting all their boosters, swallowing all their pills for all their imagined ailments, smoking their dope, hanging their Ukraine flags and their LGBTQ+ flags and their BLM flags, allowing their kids to be subjected to the most perverted public school propaganda, voting for useless lying candidates in both parties, afraid to speak up or speak out or to be perceived as “different” from all the other clones, sheep, and zombies.

Ultimately, it is the stupid, cowardly American people who are responsible for the decadent dystopian reality we live in today in the United States and the evil, corrupt rulers who control our lives. If Americans used their brains and summoned their courage, they would get together and fearlessly rebel and boldly revolt against the entire evil establishment. Put an end to it all and start over from scratch. A clean sweep! A complete decontamination! A fresh start! A grand new beginning! That is the only way out at this point, because the evil is now so ubiquitous, so deep, and so entrenched.

But at the very least, please open your eyes to see the stark reality, think clearly and honestly for yourself, firmly reject the constant lies, and speak out forcefully against the endless bullshit, people!

That’s how I see it. One man’s opinion. Am I totally alone?