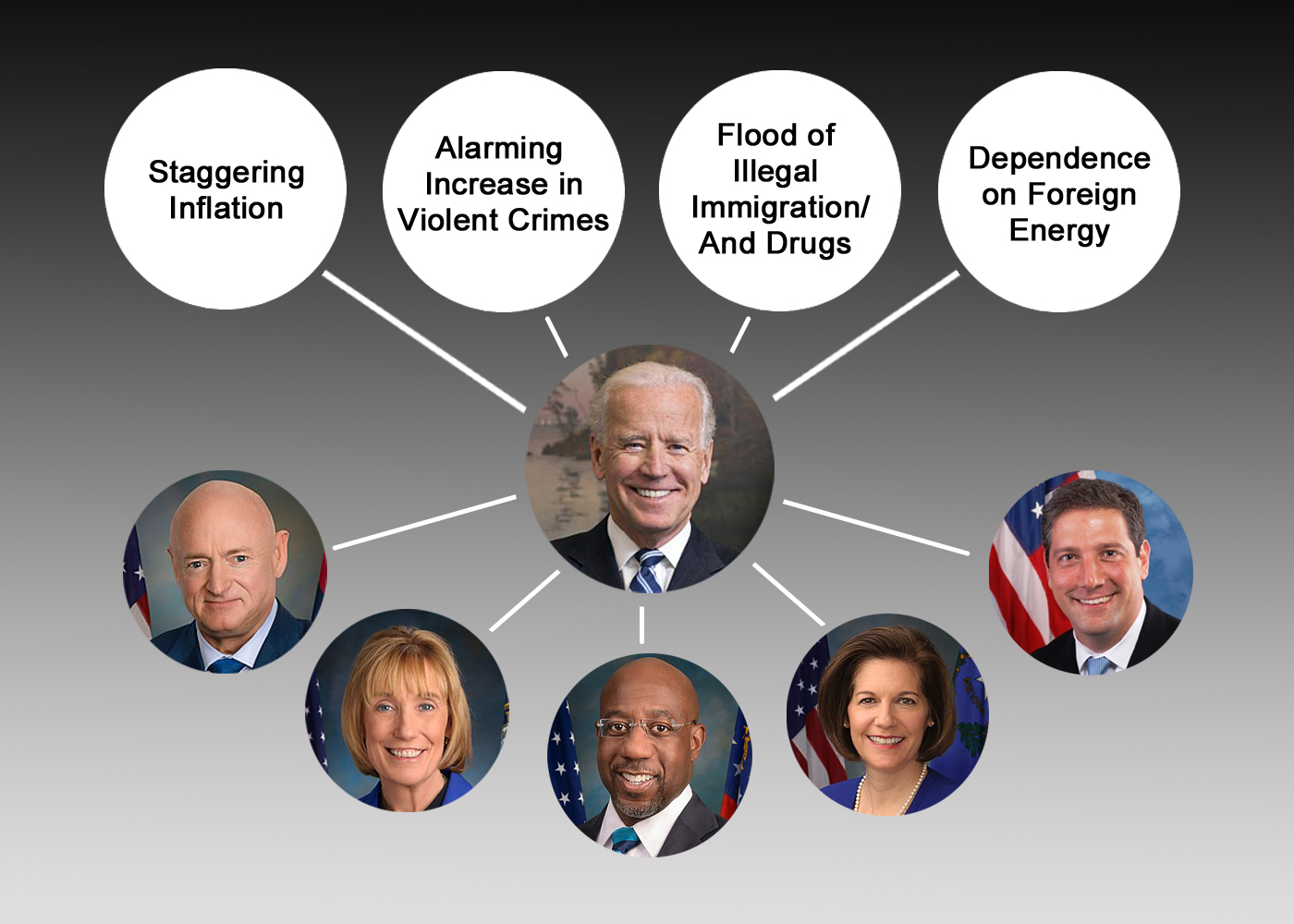 Democrats Linked by Peter Lemiska is licensed under N/A N/A
Inflation and crime are up at breathtaking levels. Our status on the world stage is deteriorating, as is the morale of our nation. The vast majority of Americans believe we’re on the wrong track. With the next election fast approaching, Democrat lawmakers want us to believe they had nothing to do with any of that. Those in tight races are desperately trying to distance themselves from a president whose policies have been abysmal failures.

Upon taking office, Joe Biden used Executive Orders to immediately begin dismantling the immigration policies that were keeping our southern border secure. The impact was profound and immediate. Hordes of foreign citizens began streaming across our border. By some estimates, Biden’s open border has so far given us five million new illegal migrants.

While Republicans were howling about Biden’s dereliction of duty, Democrat lawmakers stood mute.

Almost immediately, Biden began decimating our oil and gas industries. Gasoline prices began to spike, and inflation, which had been dormant for so many years, reared its ugly head. America, formerly energy independent, quickly became dependent on foreign adversaries for its energy needs.

Then, when Joe Biden needed Congress to pass his reckless and inflationary spending bills, Democrats were all in. The trillions of dollars, frivolously spent, often on green projects drove up inflation to near record highs.

And the historic and alarming increase in violent crime across the country can only be attributed to two things – an atmosphere of disdain for police, nurtured by Biden and Democrats, and the soft-on crime policies of liberal prosecutors.

During the 2020 rioting by BLM and Antifa, Democrats quickly labeled America’s police officers as racist. Biden was part of that. In a CBS interview, he also branded our law enforcement officers as systemically racist. Soon after came the calls to defund the police and a crop of liberal prosecutors, who seem to care more about criminals than their victims. All that was followed by a dramatic increase in violent crimes.
Now, with elections looming, Democrat politicians have become sensitive to public discontent, and are desperately trying to distance themselves from Biden and his failures.

This past year, Senator Maggie Hassan, of New Hampshire, began posing as a champion for border security. She even went so far as to visit the southern border a few months ago. Voters saw through the sham.

Now she’s campaigning as an independent thinker, the most bi-partisan senator in Congress. It was a title bestowed on her by the Lugar Center in 2021. But like so many things in politics, there’s more to it than meets the eye. It’s really just about bi-partisan sponsorship of new bills, and has nothing to do with independence from the party.

In fact, Maggie Hassan voted with Biden’s agenda 96 percent of the time.

Then, during a recent debate, Senator Mark Kelly created the illusion that he stood firmly against the president’s open border policy. He said: “When the president decided he was going to do something dumb on this and change the rules that would create a bigger crisis, I told him he was wrong.”

In fact, he did send a letter to Biden about the border. It was cosigned by Senator Kyrsten Sinema. But there were no demands to close the border. They only expressed “concern” about Biden’s plan to lift Title 42 provisions of the Public Health Service Act. That would have exponentially increased an already overwhelming border crisis.

They asked the president to “continue providing additional border management and security resources to Arizona so that our border communities do not have to bear any unnecessary burdens from Title 42 changes.” It was simply a suggestion that Biden be prepared for the massive increase in illegal immigration resulting from the planned changes.

Senator Kelly can split hairs all he wants on this issue, but the inescapable fact is that he supported Biden 94 percent of the time.

Then there’s Representative Tim Ryan, who’s now campaigning for a seat in the Senate. Ryan assures us that he “has worked to secure funding to make sure law enforcement agencies are adequately staffed, and invest in technology and resources to secure our border as effectively as possible to better keep out terrorists and criminals and prevent the spread of fentanyl and other deadly drugs.”

But he doesn’t mention the fact that he voted against appropriations for a wall on our southern border. And he doesn’t say that he supported sanctuary cities.

Nor does he mention that he voted with Biden 100 percent of the time.

Other Democrats in tenuous positions are also trying to appear moderate, but can’t erase their records. Catherine Cortez Masto voted with Biden 93 percent, and Raphael Warnock supported him 96 percent of the time.

We are where we are today because congressional Democrats have inexorably linked themselves to a president who is often confused, clearly taken in by radical environmentalists, and likely compromised by foreign adversaries. Those Democrats chose allegiance to the party over allegiance to the Constitution.

Voters, too, are strongly motivated by party loyalty. It’s one reason these races are so close. But if they can put conscience and reason before politics, we’ll see a new Congress in January. We’ll be able to correct our course and begin the long process of restoring America’s prosperity, security, and respect, both here and abroad.