China and America: The Wicked Witches of the East and West 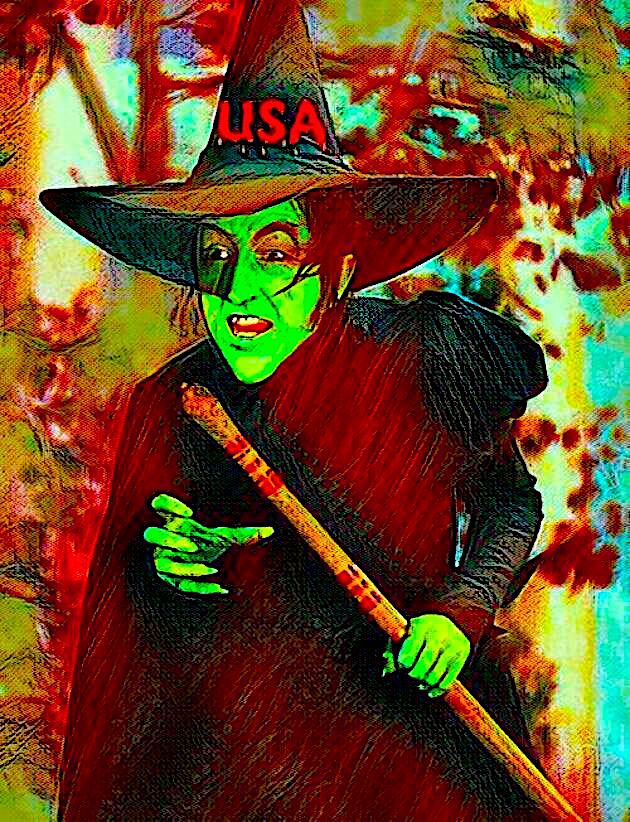 USA Wicked Witch of the West by N/A is licensed under N/A N/A
It sure seems as if all bad things—evilness, wickedness, elitism, lies, deceit, corruption, decadence, immorality, violence, death and destruction, authoritarianism and totalitarianism, mass ignorance and mass compliance, lack of logic and lack of rational thinking—are growing in their power and spreading all around the world like wildfire. I will use one word here—wickedness—to encapsulate all these bad things. It also seems, from my perspective at least, that there are two primary sources from which this wickedness is emanating. One source is in the East, the other in the West. These are China and the United States of America.

With my thoughts shaped by my recent rewatching of the classic 1939 movie The Wizard of Oz, I am going to make an analogy of China and America as the Wicked Witch of the East and the Wicked Witch of the West. These witches are described as sisters in the movie. Likewise, China and America have developed a type of strange sisterhood, superficially different but related, and strongly influencing and supporting each other as they carry out their nefarious global deeds.

China has adapted America’s capitalistic, corporatist economic system to meet its own needs, while America has now evidently adapted China’s communistic, authoritarian political system to meet its needs. Both nations are pursuing separate but overlapping globalist agendas to spread their influence and power far and wide. They may sometimes compete or pretend to compete in certain matters, but they are actually cooperating fairly tightly in their quests to dominate the world, to expand the power of their elite classes, to suppress public freedoms, and to maximize the elitist control over the common people.

This wicked sisterhood has been developing for several decades, but it recently became blatantly obvious with the COVID pandemic. It is now clear to anyone still capable of logical thought (probably a tiny minority of people) that scientists in China, with funding from the U.S. National Institutes of Health, purposefully created and unleashed upon the world a new disease-causing virus. This virus, though not substantially different from previous influenza viruses in terms of mortality or morbidity, was novel enough to cause confusion among medical professionals, to be used as an excuse by government authorities for tough clampdowns on freedom, and to generate mass hysteria among the public. And the virus achieved the main goal of its creators—get people to willingly sacrifice their most basic individual freedoms, including the right to free speech, the right to assembly, and the right to control one’s own body, for the sake of the “safety” provided by big government and big corporations (Big Pharma). The propaganda merchants in the world’s media outlets spread the brainwashing and helped to enforce the required discipline. And the masses of people, ignorant as they are of science, dutifully complied, just like the sheep that the witches had turned them into.

This unprecedented scam was ridiculously easy for the globalist witch sisters to pull off! Now they know that nothing can stop them from advancing their subjugation and manipulation of the population even further. They know that they can get away with any BS they want to stuff down the public throat, whether it’s more speech censorship, dissenter arrests, ESG credit controls, arbitrary mandates of this or that, stolen elections, “green” climate crap, gender and sexual perversion, whatever. And there is no magic water that will make the witches melt. There is no house that will fall on them to crush them. There is no wizard to help the people, and the people have no ruby heels to click together three times to escape the madness. That is because the witch sisters have already gained operational control over almost everything.

As the Wicked Witch of the East spreads out her red totalitarian arms to embrace ever larger parts of the planet, the Wicked Witch of the West is increasing the political, economic, and cultural sewage that she is excreting across the globe, mainly out of her stinking orifices in Washington, New York, and Hollywood. Foul, rancid, horrid things spew forth from these holes like wild diarrhea, generated by the elite evildoers who exercise the real power in America. These are the giant corporations, like the weapons makers (military-industrial complex), the drug pushers, the technology addicters, and the financial schemers. These are the “woke” merchants of environmental and social indoctrination, designed to divide, destroy, confuse, and corrupt. These are the popular purveyors of cultural filth and decadence, designed to demoralize and degrade the population and weaken and wipe out any resistance.

The evil witch sisters and their obedient servants often come together in secret covens, such as the World Economic Forum, where they plot their strategies and develop their spells to dominate the world and enslave the masses.

While China and America collaborate in their totalitarian globalist ambitions, there is one large nation that remains a big irritating thorn in their sides right now. That is Russia, which has, throughout its history, always been caught between the winds of the East and West. Today, Russia is clinging to the old-fashioned notions that an independent nation has the right to pursue its own unique culture, protect its national sovereignty, and resist the intense pressures of the massive globalist conformist onslaught. This great battle is currently playing out in Ukraine, where the independent Russian forces are fighting like hell to stave off the full power of the U.S. and Western globalist forces. China is watching on the sidelines, leaving this particular messy battle to her Western sister, who stupidly provoked the mess in the first place. (The West witch does a lot of stupid things, because she is not as bright as the East witch.)

The Western-based globalists cannot afford to let Russia win this great battle in Ukraine, if they want to continue steamrolling their way across the world. And the Russians cannot let the globalists win, if they want to score a crucial victory for the concept of cultural independence and national sovereignty. So, the world anxiously awaits the outcome. But either way, China will pick up the ball and advance the globalist agenda from the East. Still, a Russian victory might slow the overall globalist advance.

Yeah, after following the maddening news these past few years, dealing with the daily bullshit that intrudes into my lower middle-class American life, and watching The Wizard of Oz last week, this essay reflects how I see the world, from my lonely bunker near Chicago a day after Thanksgiving 2022. Perhaps I’m mistaken about some points, and I admit that there’s a lot going on that I can’t understand. But I can declare this with certainty: “Toto, I’ve a feeling we’re not in America anymore.”