Analyzing the Strange, Incredible Pile of Coincidences in Maricopa County During the 2022 Midterm Election 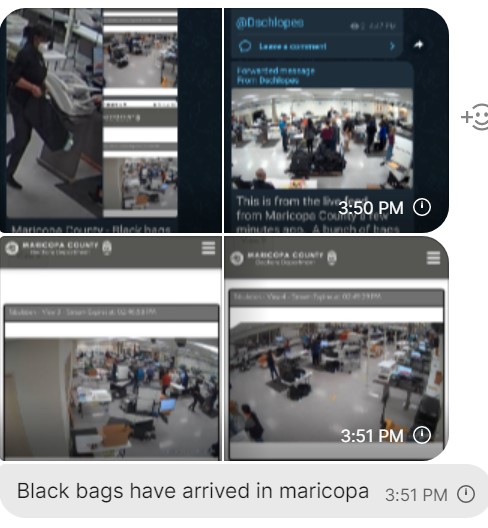 
The Democrats, MSM and RINOs are complaining about voters’ concerns over election fraud, saying “we need to move on,” “quit living in the past,” and “no one cares about it as an issue, you’re hurting the Republican Party to continue focusing on it.” There may be a grain of truth in all of that, but it’s outweighed by the fact that we may never get another Republican president into office and more states will turn blue if we don’t stop the fraud.

No one really believes deep down that Arizona rejected four top Republican candidates — three who were leading in almost every poll, including MSM polls — considering the breakdown of voter registration in the state. Republicans have a four-point voter registration advantage over Democrats in the state as well as within Maricopa County. Republican candidates swept the rest of the races around the state, leading many to believe only those four top races, which featured all Trump-endorsed candidates, were deliberately targeted.

Other than those four key races, Arizona Republicans performed exceedingly well in the election, reminiscent of 2020 when only Trump (and weak Senate candidate Martha McSally) lost. The GOP flipped Arizona’s congressional delegation back to majority Republican, winning two open seats, took back a seat on the Arizona Corporation Commission that was lost in 2018, gained two seats on the Central Arizona Project board, kept both chambers of the Arizona Legislature, including getting an even more conservative Senate President, Warren Petersen. Numerous new conservative candidates were elected to school boards and the party appears almost certain to take back superintendent of schools from the incumbent Democrat. Several of the candidates in those races, including a couple of legislative candidates who won, were endorsed by Trump.

Voters are wondering how incumbent Repubiican State Treasurer Kimberly Yee received more votes than any of the other statewide candidates — about 100,000 more than Kari Lake — even though she had low name recognition, was not endorsed by Trump, didn’t get the base excited, and conducted a relatively quiet, uneventful first term.  It’s not because Yee didn’t have a significant opponent; State Sen. Martin Quezada is one of the most well-known and popular Democrats in the state. On the other hand, Lake brought out thousands to huge rallies and was considered a Trumplike sensation across the state, with huge name recognition due to being a longtime popular news anchor in the Phoenix market.

One of the main theories going around in Arizona is that since bad actors knew Republicans were going to vote heavily on election day, they focused their efforts there instead of on mail-in ballots. They speculate that someone on the inside, likely a tech inspector, was paid a large amount of money to incorrectly adjust the settings on printers located in heavily Republican precincts the night before, after the final tests of equipment were performed, throwing in a handful of blue precincts for distraction. Well over 350% more Republicans than Democrats voted in person on election day in Maricopa County.

There are many reports accumulating of the misread ballots being commingled with ballots that had already been tabulated correctly at the vote centers, stored in “black satchels” instead of secure “Door 3” boxes as promised, lacking a chain of custody, or not tabulated when voters went to check the status of their ballots afterwards at beballotready.vote. The Lake campaign is readying lawsuits, compiling stories from voters who believe they were disenfranchised.

Arizona law provides for a new election if there is evidence of illegal votes or a candidate did not receive enough to win. However, unless there is a super smoking gun, like a bad actor coming forward and admitting bribery — and who wants to do that and go to prison — the courts are not likely to do anything about it, as we’ve learned from previous experience.

Election fraud experts tell me it’s part of a plan by Democrats to take over states one by one. First they started with states like California, Washington and Oregon. They moved on to states like Colorado and Nevada. Arizona happens to be their latest target. One election fraud expert in California believes there are actually rather close numbers of Republicans and Democrats in that state, but due to years of election fraud there, no one bothers investigating anymore, allowing it to become rampant.

What can we do? In Arizona, with Democrats almost certain to control the top state offices of governor, secretary of state and attorney general, nothing will be done to improve election integrity. Arizona State Rep. Jake Hoffman gave me some hope, suggesting increasing the number of observers and those working at the polls in 2024. Many credit Virginia’s red turn in 2021 to all the observers. The RNC said it trained 3,500 observers for Virginia’s election. In Democratic counties, the poll watchers were 2-1 Republicans. The year before, some of those counties had no Republican observers at all.

No one wants to talk about election fraud anymore because they risk being sued or even prosecuted, kicked off big tech platforms, or shunned by powerful Republicans with money, who are often referred to as RINOs due to their heavy conflicts of interest. In order to keep their money flowing in, these powerful players have to keep up many alliances and contracts with people who don’t share conservative values. There’s no easy solution there, because without funding, who’s going to pay to get the conservative message out? There aren’t enough millionaires and billionaires who can operate outside of those entanglements.

So many people just nod and wink and pretend there’s no election fraud in order to keep their funding, labeling anyone concerned about it as “crazy” or “conspiracy theorists,” which often destroys their reputations and careers and makes them question their sanity. Stories of mass election fraud, like the type 2,000 Mules exposed in Yuma County, go ignored. The focus needs to be on figuring out how to turn this type of messaging around, vindicating those who question the obvious instead of ridiculing them.